I’ve been thinking alot about hair lately. And not just mine.

You see, there’s been alot of candid talk about women and their hair recently. Comedian Chris Rock just released a documentary (I’ve not seen it) that uncovers some of the truths and myths about Black women and their locks. The movie has seemed to open up “hair floodgates” that were obviously on the brim of bursting over. A myriad of television talk shows have hosted interesting conversations and debates about hair. Can you believe it? A whole hour of prime time television devoted to the topic of a woman’s crown and glory. Lively dialogue has ensued between white and black women about hair issues, concerns, differences and details, not just on tv but, as I understand, around water coolers in the office, coffee shop tables and college campuses. In fact, suddenly even my friends and I have had some interesting hair talk. Everyone feels free to ask questions they’ve not felt comfortable voicing before.

I’ve gotta tell you. I’ve gotten my fair share of hair questions over the years. I used to be alarmed when someone would email our ministry, not to talk about how the Lord has used it to work in their lives but to ask a question about my hair!

Goodness, I’ve had tons of black women want to know how my hair does what it does, white women with bi-racial daughters wondering what products to use on their curly headed little ones, and others who are just curious when they see my hair twisted into long coils.

I’ve tried to answer them as best I could (and throw in a Scripture reference or two in order to find some spiritual redemption to the hair talk :). But I thought, since they are talking about it on tv, in the movies and on the radio, and since I FINALLY HAVE A BLOG, that we could talk about it here. Me and you.

So, I’ll start with some details about my hair.

I have natural hair. For a black woman, that means that I don’t have a relaxer on it. The vast majority of black women have a relaxer (also known as a perm). Unlike a perm given to a white woman, a perm makes our hair straight. I wore one of these from the age of 13 until I was 25. At 25 years of age I decided I’d had enough. Relaxers can be very damaging to our hair over time. I’d had my share of hair breakage so, much to my husband’s dismay, I cut off all of the relaxed hair. I was left with about 1 inch of curly hair. I cried. . . and so did he!

Well it’s been almost 10 years and I’m so glad that I took that plunge those many years ago. My hair is thicker and healthier now then it ever was when it was relaxed. (For the record, I don’t have any extensions or weave). So, I’ve become a bit of a catalyst for the rest of the women in my family. In the last  7 years my sister, mother, 2 sister-in-laws, mother-in-law and cousin have all gone natural!

I’ve gotta admit, my hair is BIG which means it’s a lot of work. So I’ve gotta have a bit of help with it. Combing it out is an arm workout that I just can’t deal with. (Grateful to have 3 sons who don’t have to deal with hair issues!) So I go to a friend who washes it and twists it for me every 2-3 weeks. Sometimes I actually leave the twists in my hair until I get back to her but most often, I let those twists dry and then unravel them. The result is a head full of waves and curls.

When I do straighten it, which isn’t often, my friend will use a flat iron or pressing comb. Then I pray for days of sunshine, since rain and humidity will turn it back into an afro at the drop of a hat! LOL!

Well, there you have it  – knots, kinks and curls – in a nut shell. Your turn. 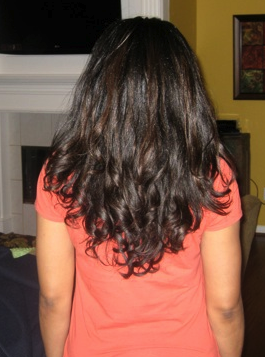 PS . . . You’ve probably already seen my hair curly so I’m attaching a picture of it on one of the rare occasions that it was straightened. Don’t hesitate to post a picture of your hair do when you write with your questions and comments. We want to see it!

**NOTE If your comment doesn’t show up right away, just be patient . . . it may take awhile to update!  We are working on this issue.