It is guest blogger time here at Going Beyond and today we have a great post by Michelle Stimpson.  That name may ring a bell for many of you because Michelle was one of our guest bloggers during the month of April! (If you’ve missed her post, Shredding the Past, or it’s just been a while, definitely check it out.)  We’ve brought her back and this one is just. as. good! If you’ve ever dealt with fear, or know someone who has, this post will really feed your soul.

Enjoy, sisters, and have a wonderful, wonderful Friday!

Are you seeing a pattern here? Wait. There’s more…

In middle school, I feared they would start hanging with the wrong crowd. And when they started driving in high school…let’s just say it’s a good thing I can only get nitrous oxide at the dentist’s office. I looked forward to the day they left my house because THEN I wouldn’t be so fearful anymore.

When our oldest, a son, finally prepared to leave the nest, the old fears sprouted up again cleverly disguised as new fears. What if he gets sick away from home? What if he gets kidnapped and I don’t realize it for days (this kid never called home unless he wanted money)? What if someone mistook him for a thug or overreacted to a silly prank?

Suddenly, it hit me: People have lied to me. There’s no feeling of “Whew! I’m done with that!” when your kids turn 18 or leave the house. I’m sure this sounds very unmotherly-like, but I’m telling you, I really thought I’d be home free when my kids finished school.

This same 18-year-old boy (6’2”, 140 lbs.—think J.J. from Good Times) decided to take the night shift at a county jail filled with hardened criminals. I knew my mind had to be renewed by something or I would have no peace.

That something was Psalm 91. The Lord led me to study it, stand on it, pray it over my son, and share this word with him, too. The truth of the matter is: There is no real protection outside of Him. Whatever He allows has purpose. Whatever He doesn’t allow flat ain’t gonna happen. 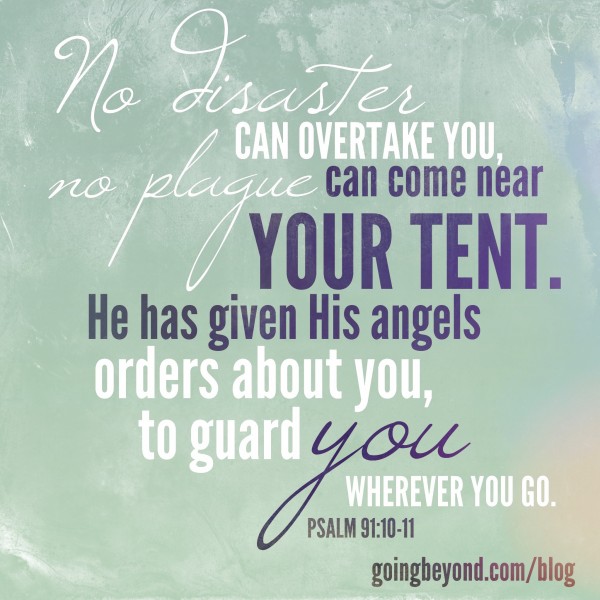 Furthermore, the only real, true, everlasting disaster that could ever occur is for someone to die outside of Christ. All other so-called disasters (even death) end with the deceased person closing their eyes to this world and waking up in the presence of Jesus. That’s not a disaster—that’s what we hope for!

As it turns out, the jail job was preparation for the next step in my son’s life, the next level of faith as his mother. He’s leaving for the Army next week. I’m not sure exactly what his assignment entails, but when he rattles off his job-code-number-thingy, other military people are like, “Dude, that’s pretty intense.”

And I take a deep breath.

God is the same God in kindergarten, in junior high, in a jail, and in the military. Moms, dads, grandparents and even adventurous children can rest in His shadow.