I recently wrote about a trip I had planned to Yosemite National Park in California. Well, today I’m here to say . . . I made it there and back . . . and it was one of the hardest things I have ever done.

Hiking up Yosemite’s Half Dome was a fairly new item on my bucket list. The view from the top was something I would daydream about. I was excited by the thought of seeing my God so big and me so little.

I visited the park the day before my hike to sightsee. I went straight to the location where you were able to get a great view of Half Dome in all its glory. I wanted to get a wide-eyed view of what I was going to conquer the next morning. 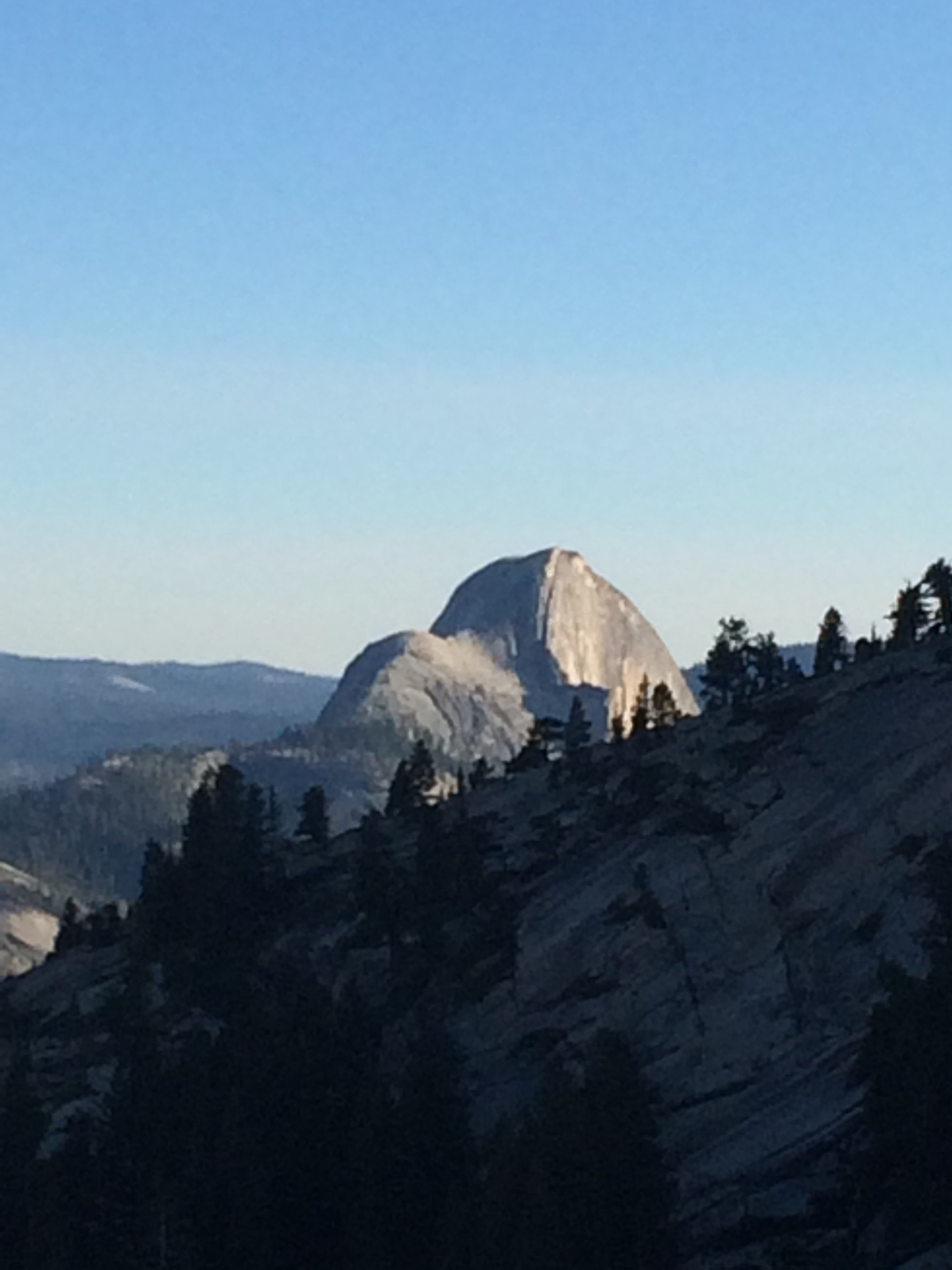 I wasn’t the only one with the same idea. This was a spot everyone flocked to. I perched myself on a rock away from the crowd and I stared in awe for a good while. I wanted to take it all in. It took a few seconds for my eyes to really adjust since there were so many depths to comprehend. The minute I was able to wrap my mind around the vastness of it all was the same minute something within me sunk. I began to feel a lump form in my throat and a knot in my stomach.

I resolved right then and there that the picture . . . the picture that I had just taken . . . would be all the souvenir that I needed. I was fine with skipping the hike and going home.

I was doing this hike alone so the fear of being on the trail by myself was the greatest. Would I get lost? Would I encounter a bear?  There had been some sightings the past few days. Would I veer off in the wrong direction and be lost in the woods . . . forever?  I prayed that the Lord would just send people to walk alongside me – to chat with, to journey with. 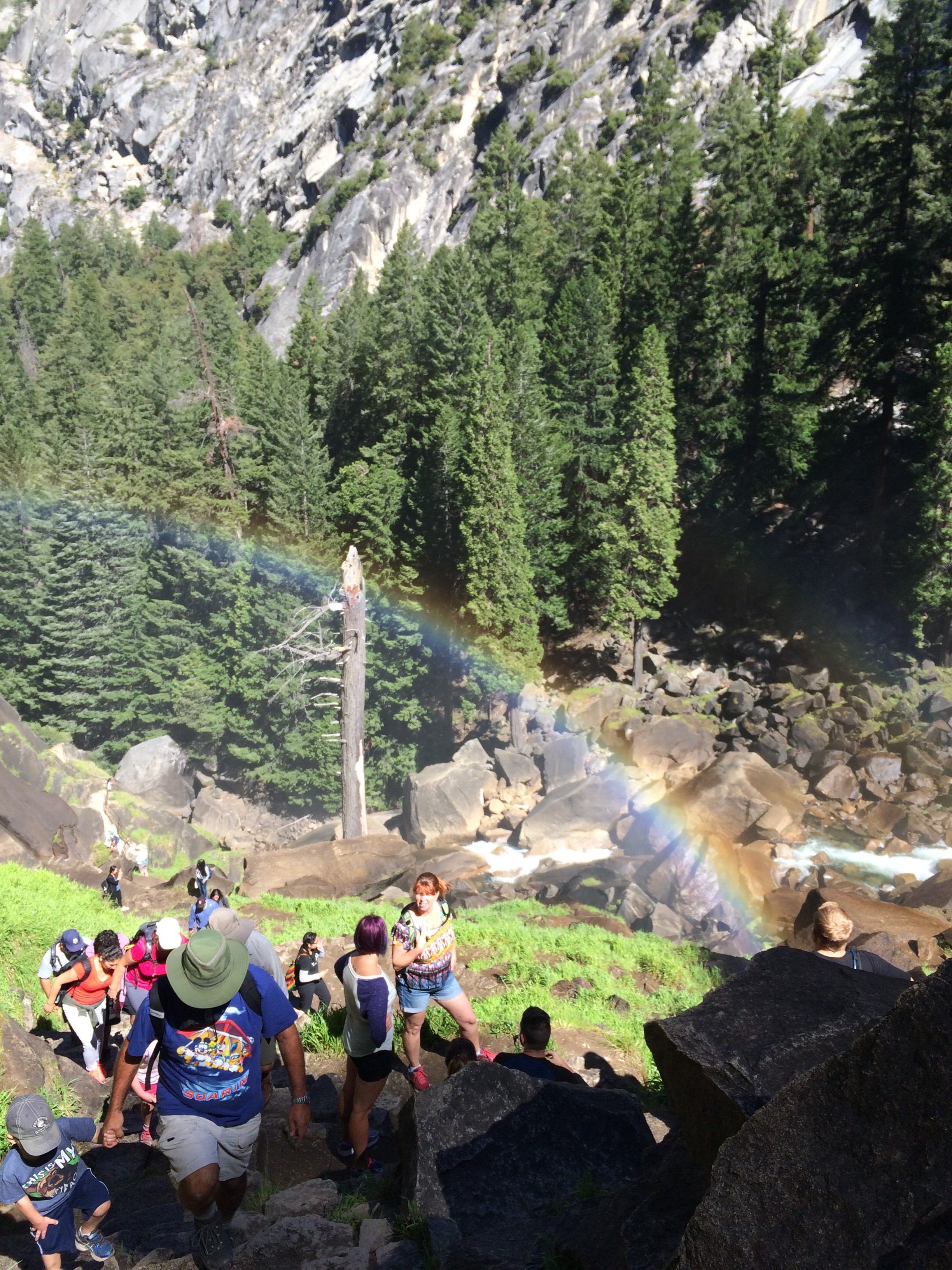 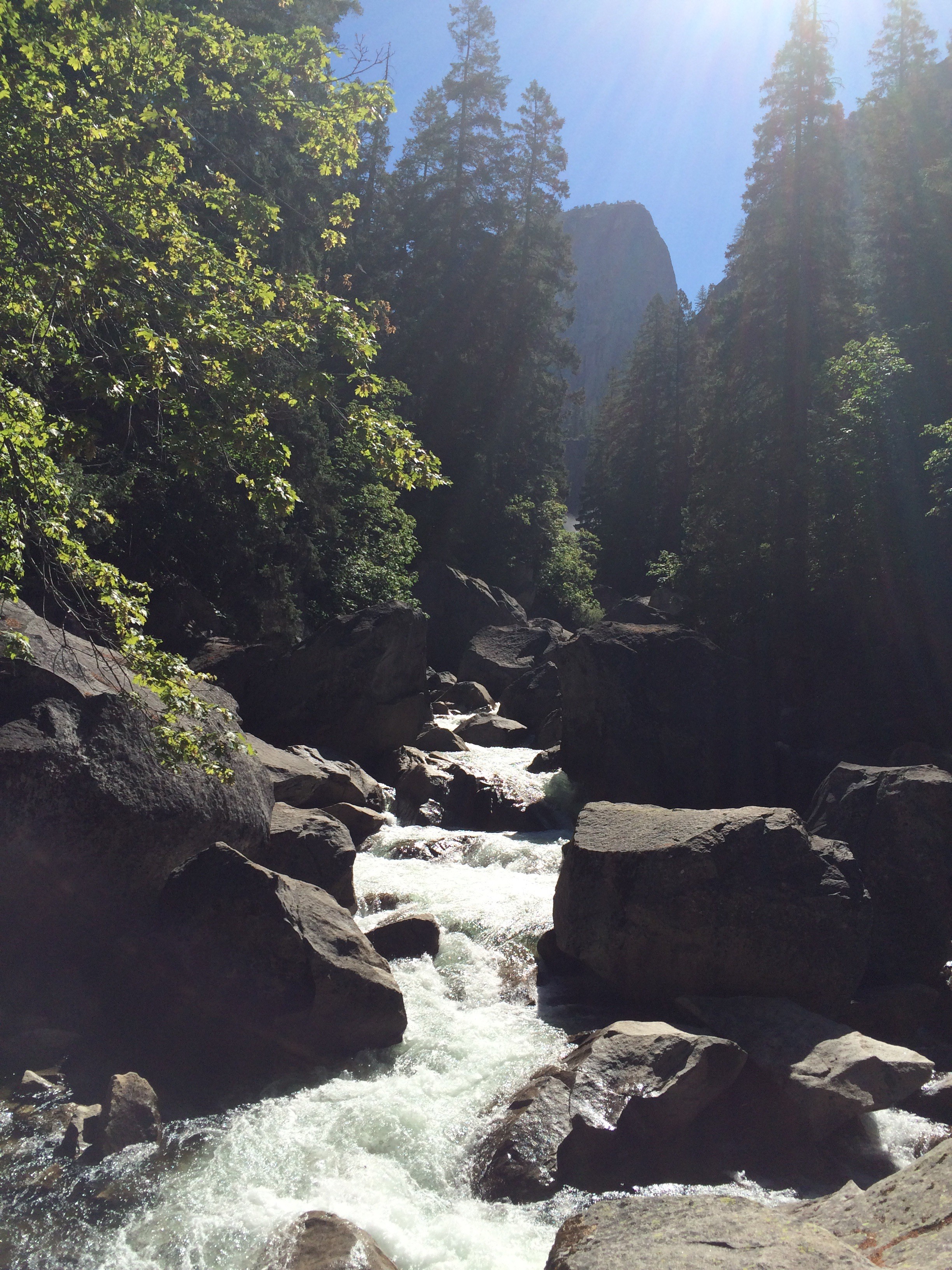 The first few miles of the trail were busy with sightseers. I made acquaintances with many friendly faces. By hour three, the scenery changed and the crowd began to dwindle. They had seen what they’d come to see and were ready to venture back. Not many were making the trek all the way to Half Dome.

It’s safe to say that was about the time I was ready to turn back as well. The rocky terrain had become challenging, the cliffs more steep and unstable and my body began to ache. Hours of hiking on an incline. I was uncomfortable and uncertain.  I began to pray but I didn’t have the energy for clever words. And breathing at this altitude needed to be strategic.

Lord, get me past this steep incline.

Lord, it’s dark, please don’t let a bear be anywhere within the vicinity.

I was amazed. And relieved. At every point of wanting to give up, I was met by a hiker or two who would chat a while and encourage me along the way. And then pass me. 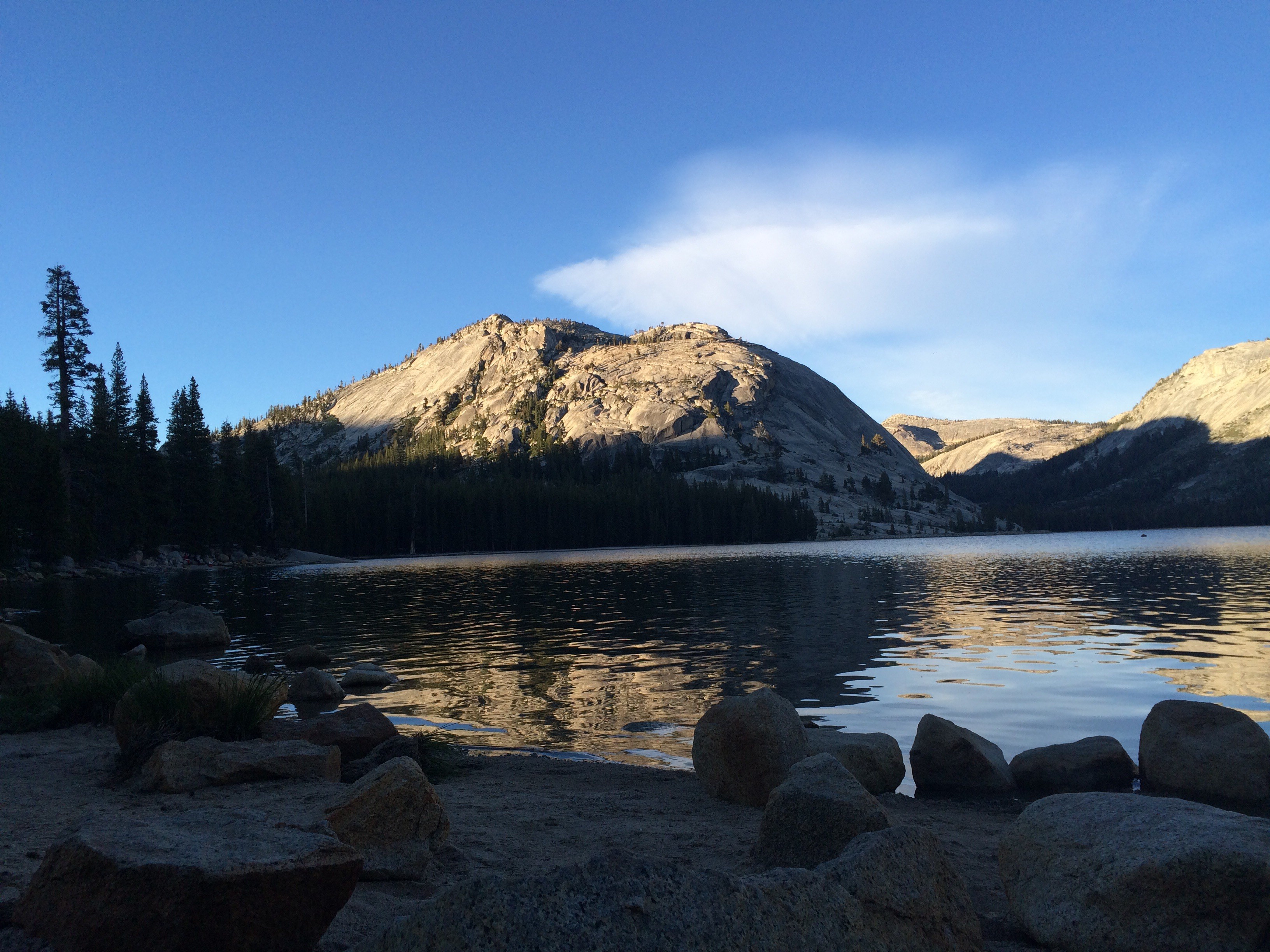 I finally made it to the top of Half Dome after a seven-hour hike. I had waited for this moment. So much so that I had my mountaintop experience planned. I was going to make it to the top, spend some quiet time up there and hear God speak to me in a loud audible voice. Or even a small still voice. I wasn’t going to be picky.  But between battling legs that wanted to give out and the thought of having to hike all the way back down, I heard nothing.

It wasn’t until the next morning that I realized I had met Him on the seven-hour hike to the top of Half Dome and the five hours it took to get back down.

I met Him in the in-between of my fear, pain and victory. TWEET

I met Him through the encounters I had with people who encouraged and guided me along the route. I met Him in my weakness when all I wanted to do was give up and turn back. I met Him in my pain when my body begged for me to quit.

I met Him in the in-between of my fear, pain and victory.

It was in the in-between that I experienced His strength made perfect in my weakness and that I was a conqueror through Him.

I also met Him in my joy when I finally laid eyes on that mountain top view. Oooh, but that view! 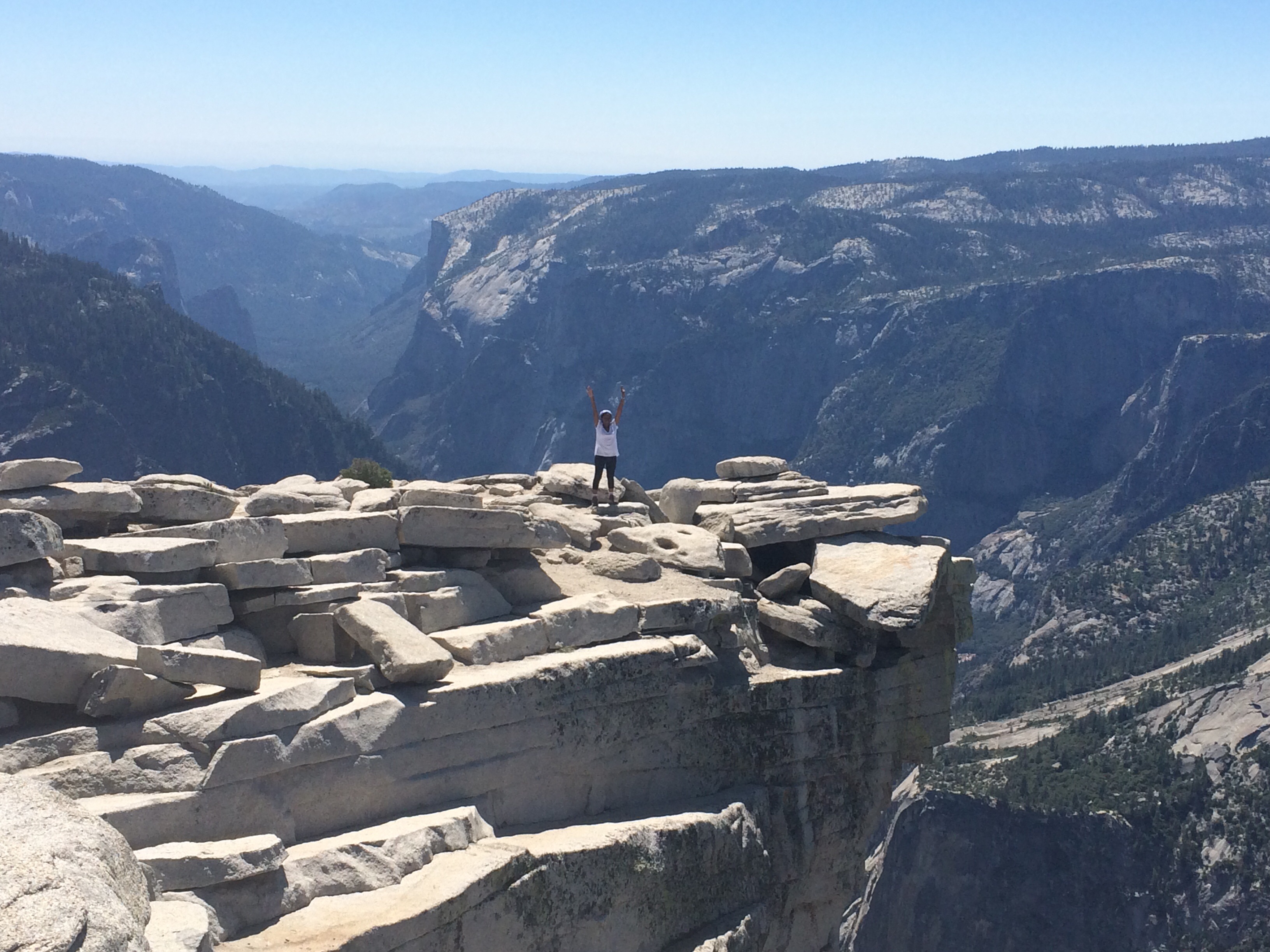 He is always with us, guiding our each and every step. Cheering us on and handing us our banner to wave in victory.

Have I not commanded you? Be strong and courageous. Do not be frightened, and do not be dismayed, for the Lord your God is with you wherever you go.
Joshua 1:9

Until we meet again,
Nicole