Sometimes that is the easiest response to give. And the majority of the time, that response is hiding an ocean of hurt. Neglect. Abandonment. Guilt. Shame. Fear. Confusion. You name it.

Let’s be honest. We’ve become good at hiding behind a smile, playing the martyr role and keeping it all together. We say everything is okay but what we are really saying is: 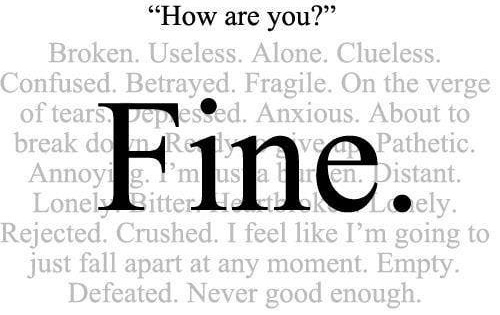 When I saw that picture I felt a bit convicted.  I sometimes hide and carry my burden alone with an “I’m fine”. You wonder that if people even knew what you were really struggling with or how you were really feeling, they would run for the hills. But the truth is, there are alot of us hurting in some way, shape, or form, carrying a burden too heavy for our frame. We have band-aid covered wounds tucked away in areas of our lives that, if mentioned, would bring up a world of hurt and endless tears.

So, “I’m fine” is how we respond simply because it’s easier to deal with.

Well, you know that burden you’re carrying around right now?

The one that is the first thing on your mind when you wake up and the one responsible for your restless nights.

You know, the one that keeps you on the brink of tears and feels like a weight sitting so heavy on your chest that it’s impossible to breath.

That one. Actually, the several that you may have gathered and are lugging around. . . All of those.

You don’t have to carry them alone.

Jesus tells us in Matthew 11:28-30 (NKJV) to, “Come to Me, all you who labor and are heavy laden, and I will give you rest. Take My yoke upon you and learn from Me, for I am gentle and lowly in heart, and you will find rest for your souls. For My yoke is easy and My burden is light.”

Did you hear that?  He knows that we cannot carry the burdens of life on our own! He wants to come to our rescue, walk alongside us, relieve the load that is on our back, and carry us through to a victorious ending. If we run to Him with arms extended, take His yoke and learn from His ways, He promises there will be rest for our soul.  That means peace; that means freedom; that means endurance; and that also means. . .sleep! It’s a deal too good to be true but He considers it a more than fair exchange!

Now, once you’ve made that trade and you are covered in His peace, fight the temptation to take back that burden to carry alone. I’m the first to admit that I sometimes leave one hand (and a foot) on the problem. . .just in case the Lord needs me to ‘take it from here’. That’s right, me. But who am I really kidding? I’ve given my problem to the God of the universe.  The universe! Do I really think that the God of the universe. . .the God with a capital G. . .the one who breathes and galaxies appear. . .can’t handle the problems I’m facing?

Today, let’s make a commitment together to take God at His word.  Let’s take Matthew 11:28-30, engrave it on our hearts, and put it into practice this very moment.  Let’s live with certainty knowing that God is in control of all things.  Even our big (small) things.

Let us rest in Him.

Until we meet again,