Home » Blog » So Many Boys So Little Time 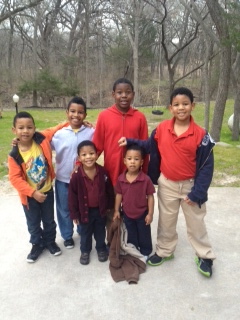 Monday evening, my sister dropped her three boys off at my house to spend the night. An early morning doctor’s visit was going to make it impossible for her to tackle the AM “out-the-door” rush the following day so it just made sense for them to bunk here for the night.Already asleep, my own 3 boys didn’t know that their cousins had arrived. That is, until the next morning when they discovered one another and went into a full-on celebration of each other’s presence. They couldn’t believe that this great fortune had been bestowed upon them on a school night! They had no idea about the doctor’s visit and didn’t care that this whole arrangement had nothing to do with their enjoyment but everything to do with their mother’s ease. The secret slumber party was thrilling to them. Just the fact that they had been in the same house overnight on a Monday made them overflow with enthusiasm.And in the midst of all of this celebrating. . .all 6 of these boys needed to be dressed, fed and prepared for their day – some at school, some at mother’s day out, some going to Grandma’s house.Unbelievably, it happened. . . and without much incident. Six boys dressed, six tummy’s filled, six pairs of shoes found, six mouths of teeth brushed, six backpacks in the car.And all of this with only 1 meltdown!Thank you Lord! If I didn’t believe in miracles before this I certainly do now. Jesus is alive I tell you! He’s alive!Small victories like these in a woman’s day are to be acknowledged! When something goes smoother than we’d thought it would or another thing becomes a joy when we thought it might be anything but one, we ought to pause and smile. These small reprieves are little gifts that we shouldn’t ignore!So, have you had a “little gift” lately? Maybe one that you didn’t recognize at the time but want to take a moment to celebrate now?Go for it. I’m listening and celebrating with you!Priscilla