He has written over 60 books. Taught the Gospel powerfully for nearly five decades. Pastored the same church for three decades. Loved the same wife and parented the same children for four decades.

He is man of faithfulness, integrity and character who I’ve had the privilege of seeing up-close my entire life.

I wish I could have pulled you around our kitchen table to experience the after-dinner devotions that happened most nights in our home. Or invite you along for our yearly month-long road trip though the States that he courageously took us on each August. Or have you join us for Sunday morning service, where we’ve sat under his inspired teaching for thirty-seven years. Then you’d see the real man behind the larger than life persona – the introspective and loving pastor, father and friend who has a heart that resonates through every message he speaks or book he writes.

His latest book is Raising Kingdom Kids – an encouraging book for parents on parenting. I can’t think of anyone more well-suited to write on the topic. And I’m so honored to end our year-long series of guest bloggers with this post from one of the most amazing men I’ve ever known.

Hidden in the somewhat tedious pages of 1 Chronicles—among the myriad of names after unpronounceable names lies one of the greatest treasures on kingdom parenting that we have. His name was Asher, which in Hebrew means “happy.” In chapter seven of the Chronicles (as well as in Genesis 46:17), we read the genealogy of his descendants. It starts with his five children—four boys and a girl. As the only girl in the group of kids, no doubt his daughter Serah held a special place in Asher’s heart. We know this for a number of reasons.

It is said in Jewish rabbinical literature that Serah is actually Asher’s stepdaughter thus making Asher a father of a blended home. She was the daughter of a woman named Hadurah, who had become a widow early on. History records that Hadurah married Asher when Serah was just three years old, and that he raised her as his own.

So loved and welcomed into the family was Serah that she is the only granddaughter mentioned in the entire lineage of Jacob, her grandfather. History records that it was Serah’s tremendous piety and virtue that won her such a high place of honor in her adoptive home.

This same piety and virtue, though, was not something Asher could have claimed for himself when he was a young man, although he later went on to live a life accented with great wisdom. Yet in his youth, Asher did something that was terribly wrong—by anyone’s standards. He joined in on a selfish and hard-hearted scheme to have his half-brother, Joseph, thrown into a pit and later sold as a slave to a traveling caravan headed to Egypt.

Perhaps due to his own early misdeeds, the ensuing guilt as he watched his beloved father grieve, as well as the subsequent near-starvation of his people at the start of the 7-year drought, Asher became a changed man. We’ll never know for sure what brought about his transformation, but what we do know for sure is the legacy he ended up leaving behind. It is a legacy of great wisdom, faith, character and service to his nation at large. A legacy not only attached to him but to generations of his descendants.

Asher’s legacy ought to give each of us hope. Asher made mistakes early on—big ones that harmed his original family. He certainly didn’t have it all together. In addition to that, he was raised in one of the most historically dysfunctional homes ever to be recorded biblically. Sprinkle on top of that the added burdens of a blended family of his own—four sons and a stepdaughter—while married to a woman who had been married once before, and most might not have considered that Asher would have produced much of anything lasting at all.

But he did. In fact, his is a great legacy and a model for kingdom parenting today. We read, “All these were the sons of Asher, heads of the fathers’ houses, choice and mighty men of valor, heads of the princes. And the number of them enrolled by genealogy for service in war was 26,000” (verse 40). According to Jewish legend, Serah went on to perform her own conquests as well.

No wonder Asher was a happy man. He did not look at his five children as getting on his last nerve. Rather, he was a satisfied man with an intention for his offspring and those brought in under his care. As a result, he and his descendants truly lived out the blessing that was given to him by his father (Deuteronomy 33:24, 25).

With 25,000 copies sold of Raising Kingdom Kids, Tony Evans succeeds in equipping kingdom parents in shaping the next generation. Now Dr. Evans turns his focus to the kids, with a practical guide for kids ages 11 to 13 to use under the guidance of a parent, mentor, or teacher. 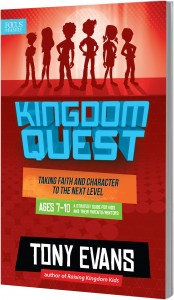 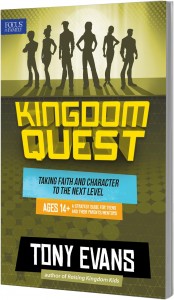 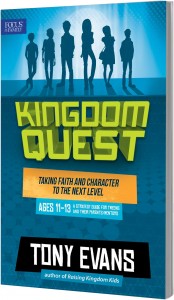 If you are a parent, teacher or mentor looking for strategy guides to accompany the Kingdom Quest Strategy books, click here for more information.