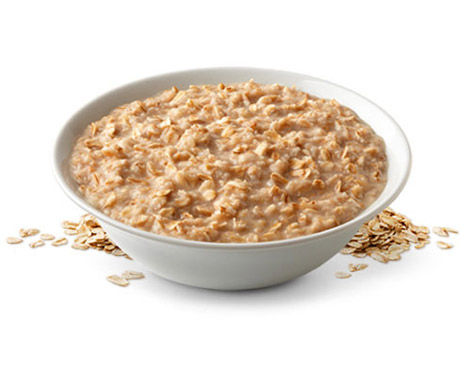 I was raised by parents who firmly believed in the virtue of a hot breakfast. My mother served up oatmeal or malt-o-meal every morning, along with toast and juice, which was carefully doled out in four ounce cups. (We weren’t allowed to chug down the juice, back in the day. Four ounces, you’re done.) Those hot cereals literally made me gag – maybe it was those unexpected, flavorless lumps in the malt-o-meal that got me, or the way oatmeal got so gloopy as it turned cold in my bowl. Shudder.

One morning, I vividly remember being told I was not to get up from the breakfast table until I’d finished my oatmeal. I was probably three at the time. The dishes were cleared and everyone left the room except me, sitting on a stool, listening to the kitchen clock tick away the agonizing minutes.

A half hour passed.

I stared at that glob of cold, sticky, gray porridge and knew I had only one choice:

Hide the bowl and lie about it.

Yep, that would do it. Clearly impressed by my own brilliance, I called my mother in to state that I was finished and ready to play.

How she saw that bowl cleverly set under the table in plain sight I will never know, but I do know I was rewarded with a nice little spankin’ for my failed attempt at deception.

By the time I was a teenager, my mother had given up the fight and resigned us to the cold cereal we loved. Of course, to our disappointment, we never had any colorful, sugary cereals, they were all pretty healthy brands. Oatmeal was reserved for cookies and old people breakfasts, and I liked it that way.

But recently, I had a craving for oatmeal, of all things, and found myself standing in front of the myriad of choices in the grocery store. Wow! It’s come a long way from one round box with the guy in the blue hat on the front! So many flavors to choose from! When did all this happen?? I guess my childhood scars had kept me from venturing any further left than granola and bran flakes.

After trying many kinds, my current favorite is raisin, date and walnut. I know, I know….it’s probably too sweetened and far removed from the plain, virtuous version of my youth, but don’t judge. It’s a STEP in the right direction. With sliced bananas and warm milk, it is so tasty it makes me wonder what all that gagging was about in the first place.

And Mom was right – eat it while it’s hot. Yum.

Funny how maturity changes your taste buds. And not just the kind on your tongue – your spiritual ones, too. Do you find that things that you used to enjoy as “mind snacks” look a little like yucky junk food these days – certain TV shows or movies, for example? Maybe it’s not so much that they are sinful, but they have simply lost some of their appeal as you’ve begun to mature spiritually. You might find that you’re hungry to get together with other believers in Jesus Christ – people you might have once thought “boring.” And God’s word is so much more appetizing than it ever used to be. What’s up with all that??

Those are signs that you’re growing up! Ephesians 4: 14, 15 says, “Be no longer children, but grow up in Christ.” We are to continue to grow “in grace and in the knowledge of God,” says 1 Peter 3:18, and we do that by seeking to know Him more and more. Maturity is a process that is both by choice and by faith – as we choose to nourish ourselves in spiritually healthy ways, that funny thing with the taste buds happens naturally. The good stuff tastes better and the junk becomes less and less appealing. I love how God makes that work.

Anything you used to hate as a kid, but now you actually like? How about your “spiritual taste buds?” What things have changed as you’ve matured?