If you’ve done the Jonah Bible study, or if you participated in the Going Beyond Simulcast this weekend, then you’ll remember the story I told about Daniel. I mention this young man as much as possibly can. . . .because he is a phenomenal person with an even more astounding story.

Every single Sunday, in my fairly conservative church, Daniel dances unto the Lord.

‘Cause He’s got something to dance about.Daniel was born to a mentally ill mother, so he was adopted by grandparents and grew up in a rough neighborhood in Dallas. When his grandfather died, there was no more restraint; nothing keeping him from getting involved with wrong people and activities. So, he ended up deeply ingrained in drug activity that eventually led to a drug deal gone bad.  At the end of it all, one of the participants ended up staring down the end of a gun barrel that Daniel was holding. The detail of the events that unfolded are unclear but this is for sure – the gun was shot and a person died. Daniel was sentenced to the Texas Youth Commission until his 18th birthday, and at that time would receive a sentence for hard time in the penitentiary. He was terrified on the day he turned 18 and went before the judge to receive his sentence as an adult. No one expected anything good to come of this day. So, everyone in the courtroom was shocked when the judge declared His decision: “We are taking the recommendation of the TYC and suspending Daniel’s sentence.” Reducing it to parole instead of time behind bars.

Daniel was stunned – and soon came to learn that the grandmother of the young man whom he had killed, had written a note to the judge asking for leniency; asking that Daniel be given “a second chance.”

This is an astounding picture of what Christ does for us. He doesn’t give us what we deserve for our sin. Instead, He gives you and me a chance to start over; to begin again.

They are worth dancing about.

And so, that’s exactly what Daniel does. 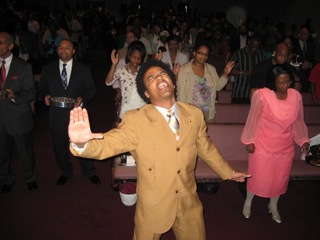 When I sat on the airplane to head home from this weekend’s simulcast
event in Panama City, Florida and the adrenaline finally started to slow
down in my body, my mind relaxed and I remembered (in shock) that I
didn’t show the 80,000 women gathered for the event this photo of Daniel
dancing. With his permission, I snapped it during church several weeks
ago and intended to show it during our final session on Saturday
afternoon. I’m sick that I missed that opportunity. So, I thought I’d
take the time to show it to you now.

Yes, Daniel is still dancing. . . and I suspect, after the second chance he’s been given, He always will.Tell me about the second chance that the Lord has given you. I betcha it’s something to dance about.Priscilla