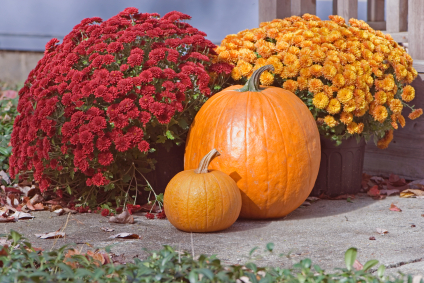 The minute I thought they wouldn’t be in danger of melting in the hot Texas sun, I put a few pots of mums and three pumpkins out in front of my house. Even though the calendar says “Fall,” it is taking awhile for the weather to come to its senses and just CHILL OUT. Two of my punkins still look great….but sadly, #3 has a bruise that is growing by the hour. It will never make it to Thanksgiving, which incidentally, I feel is the most overlooked and under-appreciated holiday of all time. But I digress.

In honor of Fall and Thanksgiving, Autumn leaves, and pilgrims and Native Americans, (and all things orange,) I give you: random facts about pumpkins. Compliments of Pumpkin Patches and More:

Pumpkins are fruits, a type of squash that cucumbers, squashes and melons.
Pumpkins are native to North America and have been domestically grown there for five thousand years.
In 1584, after French explorer Jacques Cartier explored the Saint Lawrence region of North America, he reported finding “gros melons” (large melons). The name was translated into English as “pompions,” which has since evolved into the modern “pumpkin.”
Pumpkins are low in calories, fat, and sodium and high in fiber. They are good sources of Vitamin A, Vitamin B, potassium, protein, and iron.
The largest pumpkin ever grown was over 1100 by a man in Ohio, in 2000.
Pumpkins require a long hot growing season and loads of humus, manure and water.
Pumpkin seeds can be roasted as a snack. See this page for directions.
Pumpkins contain potassium and Vitamin A.
Pumpkins are used for feed for animals.
Pumpkin flowers are edible.
Pumpkins are used to make soups, pies and breads.
The largest pumpkin pie ever made was over five feet in diameter and weighed over 350 pounds. It used 80 pounds of cooked pumpkin, 36 pounds of sugar, 12 dozen eggs and took six hours to bake.
Pumpkins are members of the vine crops family called cucurbits. They are easy to grow!  See this page for how to grow your own pumpkins!
Pumpkins originated in Central America.
In early colonial times, pumpkins were used as an ingredient for the crust of pies, not the filling.
Pumpkins were once recommended for removing freckles and curing snake bites.
Pumpkins range in size from less than a pound to over 1,000 pounds.
The largest pumpkin ever grown weighed 1,140 pounds.
The name pumpkin originated from “pepon” – the Greek word for “large melon.”
The Connecticut field variety is the traditional American pumpkin.
Pumpkins are 90 percent water.
Eighty percent of the pumpkin supply in the United States is available in October.
In colonial times, Native Americans roasted long strips of pumpkin in an open fire.
Colonists sliced off pumpkin tips; removed seeds and filled the insides with milk, spices and honey. This was baked in hot ashes and is the origin of pumpkin pie.
Native Americans flattened strips of pumpkins, dried them and made mats.
Native Americans called pumpkins “isqoutm squash.”
Native Americans used pumpkin seeds for food and medicine.

So now you know more about pumpkins than ever before….got any more random facts to add to our list? Hmmmm….I could use some good pumpkin recipes: desserts, pies, soup, baked – just thinking about it makes me want to pull out my wool sweaters and celebrate the season.