Last week, my darling donkey, Flash went missing. He’s the donkey who showed up at our house and who has been featured in Anointed, Transformed and Redeemed, when Priscilla told the story about the time he found a girlfriend in the next pasture.

Anyway, we spent 2 days looking for him, calling neighbors, notifying the sheriff, and trying to figure out exactly how he’d gotten out. True, a gate had blown down when a cold north wind came through, but it had only been down for a couple of hours and he couldn’t possibly have escaped during that time….or could he have??

On Friday, the sheriff’s department called just as I was about to put up “Missing Donkey” signs, and they let us know that Flash had been found. We eventually got him home, but only after a lot of tugging, coaxing and hand-feeding him to cooperate. He left a path of destruction and some angry horses behind him – I guess if he went looking for trouble, he found it. He didn’t look too remorseful, but I could tell he was happy to be back in his own, safe pasture.

We went back to that gate in question and did a closer investigation. We realized it had been jimmied with by some kids who had been playing a game of Capture the Flag a couple of weeks ago. We hadn’t noticed that it had come off its hinges and was barely hanging there because it “looked” OK from a distance. We didn’t bother to double check that it was sound, and had simply assumed that it would hold. But as soon as that north wind blew, it came crashing down.

Yesterday’s discussion about how Michal despised her husband got me to thinking about minding gates – and guarding my own heart. I saw myself in so many of the comments – the inner struggle to respect and honor when I don’t feel my man “deserves” it. The thought patterns that I sometimes allow myself to indulge in. The fantasy life that can kill a marriage. Those are “gates” to be minded – and mended. See, when I let myself out to wander down the road of dissatisfaction, there is no end of trouble to be found. When I leave a gate open for Satan to come in and mess with me, I’m just asking for it! 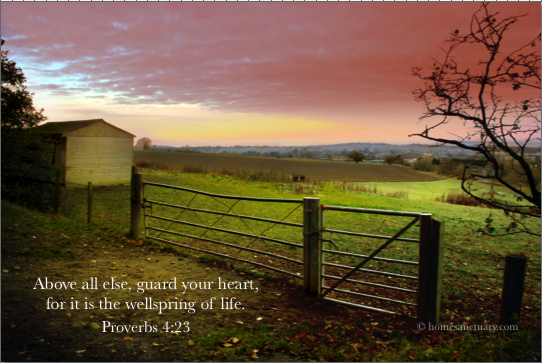 I loved that many of you wrote how God has healed and mended your marriages – and it seemed like a common theme was that it started with YOU. With you making a decision to stay within the safety of your own pastures, to keep the gates of temptation closed, and to shut the door on disrespect and dishonor.

Gate minding. Heart guarding. Thank you for the reminder to pay attention to the little things that make a big difference.

How can you mind the gates of your heart today? What scriptures can you stand upon that will strengthen your fences and help you see your husband and marriage in the way that God does?

We are praying for you and standing with you.