Car trouble. Nothing can cripple a good day like car trouble. My car had been making this awful noise for the past few weeks and with other things crowding my schedule, I had yet to get it looked at. “I’ll get to it tomorrow,” I told myself . . . many times. Several tomorrows had come and gone and before I knew it, I had ignored the problem for three weeks.

I wasn’t looking forward to dealing with it and was dreading the stress, cost and inconvenience it can bring. At a point when the noise could no longer be ignored, I decided “tomorrow” would be the day I took it in for a check-up. For real this time. If I waited any longer, I imagined I’d be picking up car pieces behind me from off the highway. A bit dramatic? Perhaps. But it didn’t sound pretty!

Tomorrow had come. I walked out of my house fighting back tears while sending out invitations to my pity-party via text message and pleading for God to show me that He was truly in control. I threw my purse and workbag in the back seat of my car only to be stopped by a piece of paper that had been sitting in that exact seat for the past several weeks. 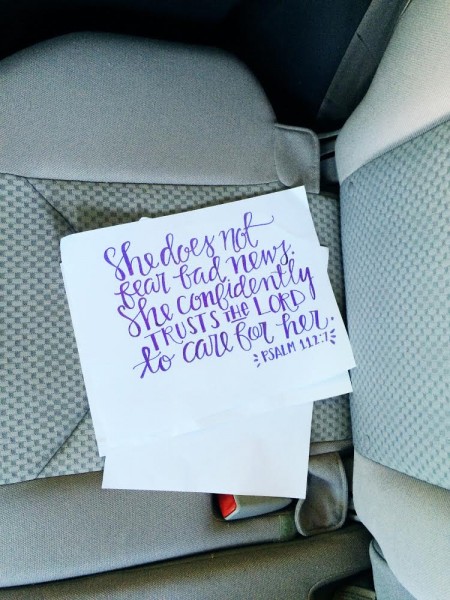 I froze. My eyes grew wide. He’s got my attention.

It was in that moment I found my answer, which was literally sitting within the source of my problem. I had written that scripture a few weeks prior for a couple of friends and had every intention on giving it to them as soon as our schedules allowed. But that time had yet to come. I’d seen that same piece of paper everyday in the back seat of my car but this time, something within me changed. My demeanor, my emotions, my outlook. All of that had changed. My focus had now shifted back on to God and His promises for us.

The pity-party that I was having?  Yeah, it ended abruptly. It was louder than His voice and was made clear that it wasn’t helping my trust in Him or His Word. I had to put away the streamers . . . the party hat . . . the noise-makers . . . the invitations . . . and sweep up the confetti. All that confetti.

I got in the driver’s seat, shut the door, and sat there in silence taking in all of what just happened. He answered the prayer I had mumbled as I walked out my front door. He heard me. Tears still fell but it was from the realization that He was so very near in that moment.

I know that car troubles may be the least of someone’s problems right now. You may be dealing with health, family, or financial issues that are extremely burdonsome. What I want to share with you today is that God cares about your big troubles, your little troubles, and all of your in between troubles. He knows the weight it bears as you carry it on your shoulders and He’d prefer that it rest on His. He wants us to trust Him in all things. 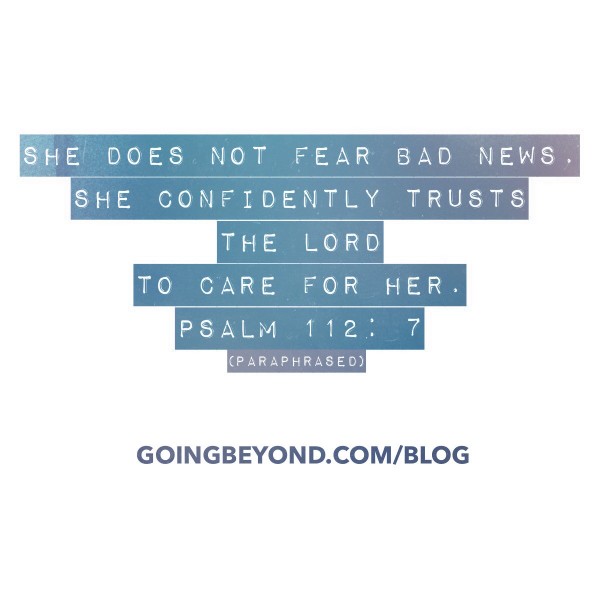 So, as I wait for that phone call, I will not fear the news that will be on the other side. I will confidently trust that He has already taken care of whatever the news may be and has a solution in place just waiting to be unveiled. The problem still exists, yes, but worry and fear are now replaced with peace knowing that He is in control.

Will you trust with me? Whatever circumstance you are currently wrestling with or news you are waiting to hear, will trust that the Lord will care for you and see you through just as He promised?