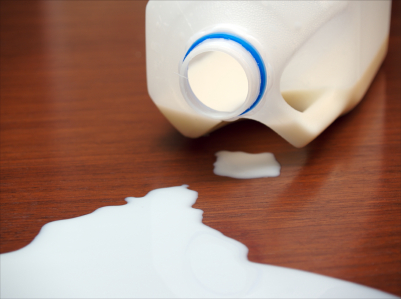 I’m just sitting down to write to you after a very long day. In fact, I’ve just plopped in this chair after being on my knees in the kitchen with my sister for the last little while. We’ve been cleaning up spilled milk – and not just a little bit of milk either – a whole gallon of it.You see, my sister’s boys came over to play with mine today. That’s right, she’s got three just like mine. They are almost identical in ages; just off by a few months in either direction on the calendar. So, this afternoon for approximately 5 hours, two 7-year-olds, two 5-year-olds and two 2-year olds were running all over the place. And, as expected, they had a great time together.When my son asked if he could pour himself a glass of milk, I didn’t think twice before telling him “yes”. Pouring his own milk has been an important “rights of passage” thing for him lately so I gladly obliged. Honestly, I was too busy fixing dinner plates for the big boys and keeping the little ones from throwing any more legos in the toilet not to.So when I heard a smashing (or was it “swooshing”) sound by the kitchen door, I turned around abruptly to see a gallon jug cracked open on the floor and loads of white milk seeping into every nook and cranny on that side of the kitchen. My sister and I were too shocked to move. We just stood there with our mouths hanging open as we watched the puddle grow. Finally, we were jarred back to our senses and started cleaning up the incredible mess.I was still on my hands and knees 20 minutes later (we had to move the refrigerator, wash kitchen mats, etc) when my son tapped me on the shoulder and said, “Mom, I’d still like some milk.”What in the world? He, more than anyone else, should know that WE DON’T HAVE ANY!!!Poor little one, someone should have warned him that you shouldn’t ask your mother to pour you some milk when she is currently cleaning all the milk she could possibly give you off of the kitchen floor that you spilled all the milk onto.But no one gave him that memo, so he looked at me in a demanding little five-year-old “I’m waiting on my milk” kind of way. Good thing he got distracted by his cousin calling him to come play. No telling what would have happened otherwise! Well my friend, I’m not sure what the moral of this story is. In fact, I don’t think there is any spiritual significance at all. I guess it just might make me feel better to know that someone else knows about my messy evening and has maybe even had a few of their own. . . Your turn.Priscilla