Have you ever taken a standby flight?

If you have or know someone that has, you know it is a gamble. Waiting at the airline to see if you will possibly secure a seat on the plane; the probability fluctuating every minute is nothing short of very, very stressful.

I know this all too well.

Not too long ago, I was in need of getting home to help a friend. I decided to reserve a last minute flight using a buddy pass (a standby pass available to friends and family of airline employees). I did my best to arrive at the airport with sufficient time and headed to my gate.

My eyes gazed to the screen behind the ticket counter listing my name as #22.

Although I had been previously informed that there were only two seats available on the flight and many passengers vying for those seats, this news was unexpected!

My posture grew tense as I considered the probability of making the flight – slim to none.

I felt so defeated, but knowing that there was even the smallest possibility that I would acquire a seat was enough to give me hope.

With just under an hour until boarding, I was required to practice patience. Would the twenty-one standby passengers ahead of me show up for the flight? Would paid passengers be “no shows”? Would there be other flights delayed, affecting the status of mine? 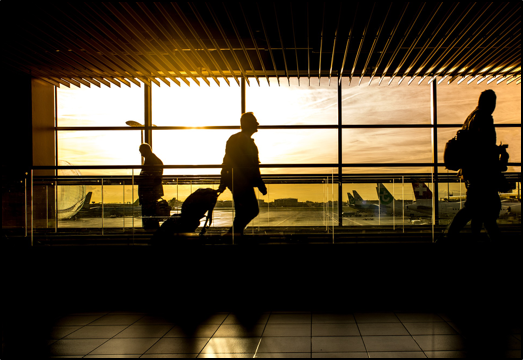 Thirty minutes to board. Four standby passengers were granted seated tickets, only mildly easing my anxiety. #18 was still a stretch, but more promising.

Twenty minutes to board. To my surprise and utter astonishment, two more seats opened up! The flight attendant went down the standby list, calling name after name. Six standby passengers at the top of the list had not yet arrived.

The attendants continued down the list until . . . I WAS NUMBER SEVEN! To see such a drastic shift in a short amount of time left me more optimistic. I gathered that in response to the initial length of the standby list, many standby passengers had not shown up for the flight. They may have decided to forego even making an attempt because the outcome appeared unfavorable.

Boarding time arrived. Ticketed passengers began entering the plane. I watched one after the other, after the other. I was hopeful that I would be called to enter in the line behind them.

The final boarding call came. The voice of the attendant echoed throughout the airline as she informed all passengers that the gates would be closing.

She proceeded to list the names of the remaining standby passengers. The next on the list received her ticket and a seat on the plane.The attendant then announced that there was only one seat left. She called the following passenger’s name, only to find out that the next five passengers were traveling together and were unwilling to separate.

What appeared to be such a bleak future turned out to be bright.

How often do we as believers see such a hopeless situation and consider all as lost? We refrain from extending ourselves and taking a risk because the outcome we desire seems nearly impossible. God calls us to see beyond what meets the eye (2 Corinthians 4:18). He calls us to walk in faith despite the circumstances (Hebrews 11:1). Our humanly perspective pales in comparison to our Master’s vantage point. He is abundant in power (Psalm 147:5) and nothing is impossible with Him (Luke 1:37). Therefore, our difficult, unpromising circumstances are but small change to Him.

So, I encourage you to show up for your flight. Stand in line, and wait patiently, hopeful that the Lord’s promises will be fulfilled.