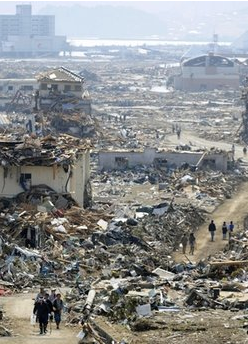 I’ve been completely overwhelmed and shocked by the images that I’ve seen. I’m sure you have too. The news reports and video segments of the earthquake that shook Japan and the tsunami that swept over their land are unbelievable. I sat with my mouth agape and heart fluttering as I watched. Tears burned the corners of my eyes and a gasp of awe escaped my lips when I watched the water burst past its normal soil barrier into the adjacent communities. Seeing those houses and buildings being swept away as if they were made by paper was startling. Mostly because I didn’t just see cars and houses being swept away, I was imagining the people that could have very well been in them.

Yes . . . people. They just got up to go to work, take care of their families and make it to the end of another day. And yet there have already been 1000 people reported lost to this disaster and 9000 more that are unaccounted for.

And so, we pray for them; that God’s peace will guard them and bring divine restoration and healing. But, I urge you not only to pray for them, but also to not miss a divine lesson that is to be learned from this shocking occurrence.

In Mark 13, James, John and Andrew had a private meeting with Jesus. They had a pressing question to ask him. They were wondering what the signs would be of Christ’s return. Jesus responded by saying that they would recognize the beginnings of this time when there were wars, rumors of wars, earthquakes and famine.

Sure, we’ve seen each of these things throughout the millennia that have already passed, but there has never been such a condensed, simultaneous occurrence of them on this planet.

And so, I wonder – is this the beginning? Is the earth groaning, awaiting the return of our soon coming King?

And only you know. . . . if you’re living a life prepared for His return. If you’ve been waiting to accept the Lord as Savior or get serious about your relationship with Him, I’d not wait too much longer, my friend.

The time of His return draweth nigh.