So, here’s the deal. I think kids should be active – busy, playing, being creative, outdoors, romping around, exerting energy. 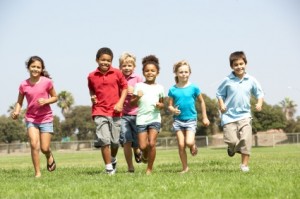 Particularly in the summer months when there are so many hours to utilize before bedtime and it can be so tempting to spend most of them on the sofa. Somehow, the electromagnetic forces of all their handheld gaming devices have scrambled their brains; causing them to think that being inside in front of a screen is just as exciting as being outside in front of a world of fun just waiting to happen. I’m in a personal revolt against that.

I’m on a mission to straighten their thinking back out. And one of the many reasons for this is: my boys need excercise and so do I. Seriously, we eat fairly healthy as a family but we have our fair share of sugar and carbs. We like to eat. . .everything. . carbs, sugar, gluten (I’m not even sure what that is . . . but we like it). So, we’d all be rolling down the hallways of our house and busting out of all our clothes if we didn’t get our bodies moving. But I understand that excercise is not the most fun activity for kids especially when I label it that way:

Somehow, that just falls flat every single time. Never works out well. Here, see if it works on you:

See what I mean?

So, I’ve come up with another tactic that has been working great! At a time that’s convenient for me (usually right before I want to take my shower for the day) I yell out, “It’s time to add another “super” to your super-duper-ooper-duper surprise that you have coming!” At that, all my sons jump to their feet, excited to join their mother for a run ( a run that really is my selfish attempt to get my own exercise in for the day).

So, we run laps around the house. Actually, we sprint them. It isn’t a race but every person has to give their own personal best for each one in order to earn another “super” or “ooper”. For each lap they complete another gets added to the surprise that I’ve promised them.

As the adjectives pile up, the anticipation grows about what the surprise might be. All the while, they get the exercise I want them to have and mom accomplishes her personal workout goals for the day!

Except that . . .I have no idea what this amazing “surprise” is.

But that’s not the point.

My kids are running and they are running ALOT – up to four or five laps every other day. Recently, their cousins – who live next door to us – have been joining in on the fun so the excitement has been contagious!

Who cares that I don’t know what I’m going to surprise them with and that by the time they get all their “supers” and their “oopers” I’ll probably end up having to take them to a five star restaurant followed by a private jet ride to Turks and Caicos for a 7 day vacation in a beach front villa.

And, somehow, I think that a slumber party right here at home with a few friends, microwave popcorn and a good movie is going to make them think they hit the jackpot.