(*The following is Priscilla’s message during the National Day of Prayer
gathering at the United States Capitol on May 3, 2018.)

In the final portion of Ephesians, the Apostle Paul lists the tactics that our enemy uses to discourage, dissuade and deter believers. His ultimate goal is, of course, to keep us from experiencing the victory that is rightfully ours in Jesus Name.

In Ephesians 6:16, he says that any person, or for that matter, family or church or culture or nation that desires to have victory needs a shield and he points out a specific reason why. The enemy, he says, is sending flaming missiles and they will need to be extinguished.

The launching of flaming arrows was a usual scheme of warfare in the first century when Paul lived. When a strong, unified Roman army stood shoulder-to-shoulder advancing in one line they were nearly unbeatable. So, the enemy troops would send arrows that had been set aflame into their ranks. The goal of this tactic was not necessarily to kill the soldiers. Rather, their intention was to set tents and caravans, weapons and artillery aflame. With fires burning and destroying their camp, some of the soldiers would need to leave the front line of battle so that they could tend to the fires. When these soldiers abandon the line to tend to the fires that the enemy’s arrows had caused, there would be holes left in their ranks – weakened, vulnerable openings that kept the entire army from being fortified as one impenetrable unit. And this is when the enemy would strike. They’d rush in when their opponents were no longer . . . unified. 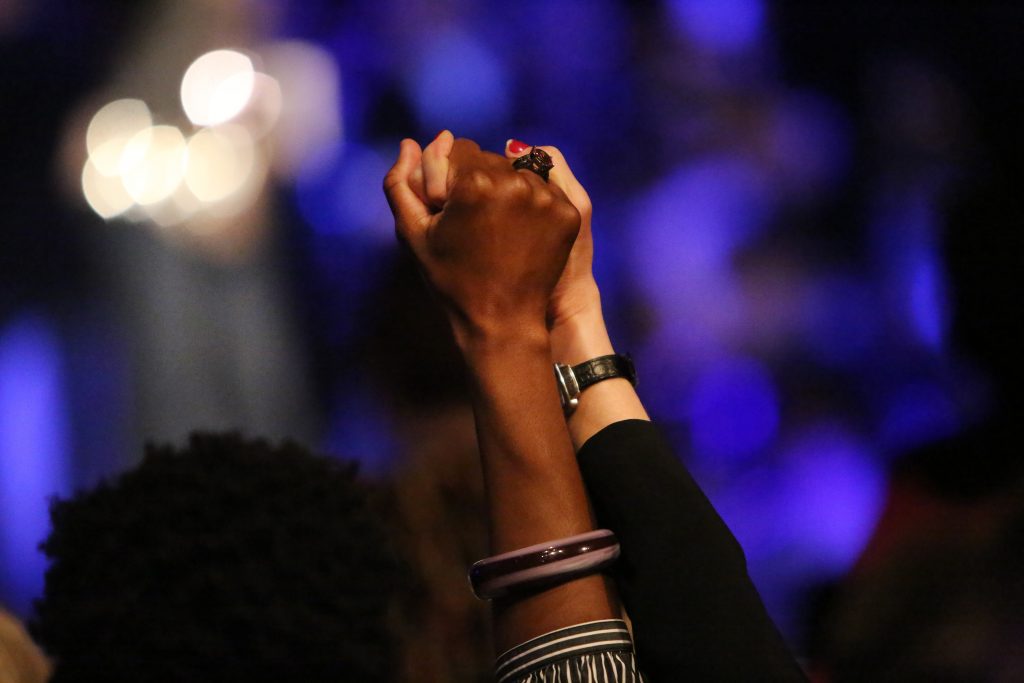 The reason why the issue of unity must be a matter of diligent, heartfelt, fervent prayer, not just today but every day, is because we have an enemy who is working overtime – sending flaming missiles sailing in our direction in hopes that he can break our ranks. He wants the line of unity broken so that we are left fragile, vulnerable, weak and exposed to his attacks. He’s sending flaming missiles sailing into our families. We can smell the smoke and see the soot racially, denominationally and culturally. We are divided, distracted by lesser important and less needful battles, watering down our potency and power to win the war against him – the only real enemy we actually have anyway. He is hoping that we won’t recognize his work, that we won’t detect his scheme. But division is always one of the signatures of the enemy. And, by in large, we are seeing this fingerprint far too often. Our families are disintegrating, churches are dividing, racial groups are splintering over issues that are actually flaming arrows of the enemy – sent intentionally to distract and divide us, leaving our ranks fractured and weakened.

But when you are fighting in a war, you don’t care about the color of the soldier next to you. All you want to know is whether or not he is shooting in the same direction you are! This is what unity is – not sameness but oneness of purpose and resolution.

This is what unity is – not sameness but oneness of purpose and resolution.TWEET

And so today, through intentional prayer, we hoist our shields, we file back into line with our brothers and sisters, husband and wives, young and old, black people and white people and everything in between, Baptist and Methodist, Presbyterian and Pentecostal.

Unity – and reconciliation one with another – is what a friend and mentor recently described to me as “A MATTER OF URGENT GOSPEL PRIORITY.” This is an accurate sentiment because unity is an issue that is at the heart of the good news of Jesus Christ . . .

“But now – Ephesians 2: 13-14 says – you have been united with Christ Jesus. Once you were far away from God, but now you have been brought near, reconciled, to him through the blood of Christ. For Christ himself has brought peace to us. He united Jews and Gentiles into one people when, in his own body on the cross, he broke down the wall of hostility that separated us.” (Ephesians 2:13–14, NLT)

Uniting that which was once separated is indeed why He gave His very life – it is why He shed His life – blood – first to reconcile our relationship to the Father but also to bring us together as one family underneath the umbrella of His blood shed on Calvary.

What an affront to the high price He paid when we do not take this issue as seriously as He did.

So on this national day of prayer, we stand together in a unified front to let the enemy know that we recognize his tactic and to let him know that we won’t sit back idly and let him play us for the fool.

Not on our watch.

We are the people of God and victory is ours in Jesus Name.